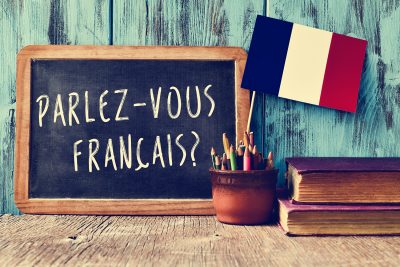 Parlez-vous Français? I’m often asked if I would provide a legend of French words used in my books, but for the moment I’m resisting.

When I first decided to write a series of romantic suspense books based in France I wanted to give it a flavour of the country and the language.

I’m a secret hoarder of Mills and Boon romances with Italian heroes. I enjoyed the occasional ciao and ma bella in the story. Then one day I noticed Sharon Kendrick had used a few different phrases (although this may have been a Greek hero, I’m really not that fussy) and I liked it!

So I emulated it. And maybe I did get a bit carried away. But I assure you, the text within the book always gives the meaning of the words. There is no need for a legend.

If you’ve ever learnt another language you’ll know that literal translations are very hard. Even subtitles on the television are localised to reflect context and idioms.

But I also concede that not everyone likes it. In fact, it annoyed someone so much in one of Frederick Forsyth’s novels they felt compelled to write an article in The Guardian about it. Quoting the lines:

Lebel finished reading the last of the reports from the file in front of him. When he looked up it was to find fourteen pairs of eyes on him, most of them cold and challenging.
‘Alors, rien?’
The question from Colonel Rolland was that of everyone present.
‘No, nothing I’m afraid,’ agreed Lebel. ‘None of the suggestions seem to stand up.’

Alors translates as “then” or “at that time”, but the French often use it in the same way we might start a sentence with “so”. In this case “Alors, rien?” would be translated as “So, nothing?”. But as you can see in the example above, the gist of the words is clear from the following sentences.

Alors, 🙂 for the time being, I’m afraid the French words stay. I promise that you won’t have missed a thing by me not translating the text, and in some cases you might be better off not knowing.

To emphasise this point I leave you with this video that explains French swear words and why describing your room as a brothel, simply means you’re messy. Enjoy.